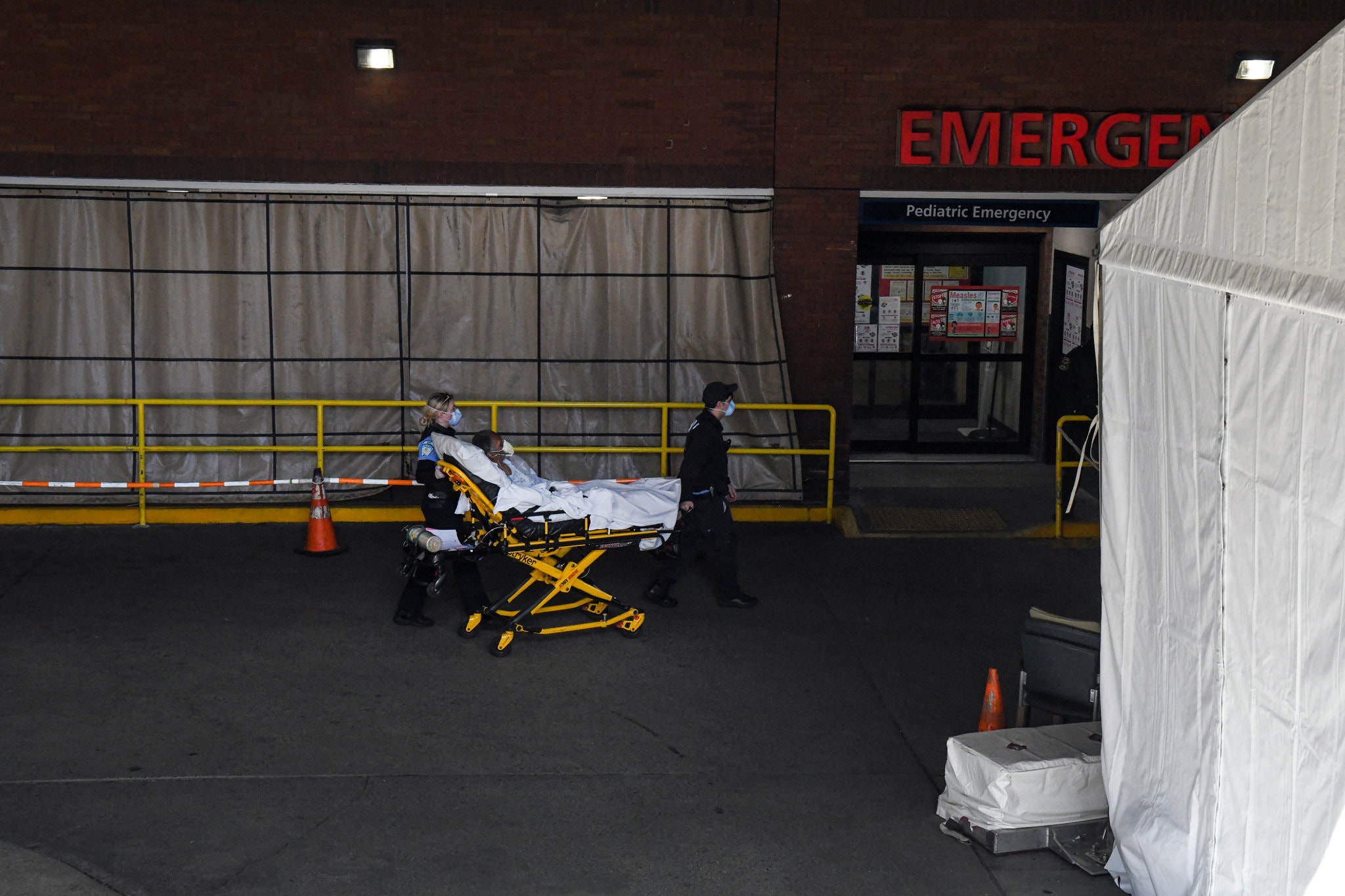 Posted at 19:47h in Afrodescendencia by admin
0 Likes

Data on race and the coronavirus is too limited to draw sweeping conclusions, experts say, but disparate rates of sickness — and death — have emerged in some places.

The coronavirus is infecting and killing black people in the United States at disproportionately high rates, according to data released by several states and big cities, highlighting what public health researchers say are entrenched inequalities in resources, health and access to care.

The statistics are preliminary and much remains unknown because most cities and states are not reporting race as they provide numbers of confirmed cases and fatalities. Initial indications from a number of places, though, are alarming enough that policymakers say they must act immediately to stem potential devastation in black communities.

The worrying trend is playing out across the country, among people born in different decades and working far different jobs.

There is Donnie Hoover, a judge from Charlotte, N.C., who could not shake a dry cough that arrived in March. On the South Side of Chicago, LaShawn Levi, a medical assistant who rides the bus to work each day, turned to tea and cough syrup — “everything your grandma taught you” — to treat a headache and a cough. And in Detroit, Glenn Tolbert, a union leader for city bus drivers, was coughing so much that he got tested.

“This is a call-to-action moment for all of us,” said Lori Lightfoot, the mayor of Chicago, who announced statistics of the outbreak in her city this week. African-Americans account for more than half of those who have tested positive and 72 percent of virus-related fatalities in Chicago, even though they make up a little less than a third of the population.

“Those numbers take your breath away, they really do,” said Ms. Lightfoot, who is the city’s first black woman elected as mayor. She added in an interview that the statistics were “among the most shocking things I think I’ve seen as mayor.”

North Carolina and South Carolina also have reported a ratio of black residents to white residents who have tested positive for the virus that well exceeds the general population ratio. Black people are overrepresented among those infected in the Las Vegas area and among people who have tested positive for the virus in Connecticut. In Minnesota, black people have been infected with the coronavirus at rates roughly proportionate to their percentage of the state’s population.

On Tuesday, President Trump acknowledged the growing signs of disparity, and said that federal authorities were working to provide statistics over the next two or three days that might help examine the issue. “Why is it that the African-American community is so much, numerous times more than everybody else?” he said at a daily briefing on the coronavirus.

For many public health experts, the reasons behind the disparities are not difficult to explain, the result of longstanding structural inequalities. At a time when the authorities have advocated staying home as the best way to avoid the virus, black Americans disproportionately belong to part of the work force that does not have the luxury of working from home, experts said. That places them at high risk for contracting the highly infectious disease in transit or at work.

Ms. Levi, the medical assistant from Chicago who fell ill, thinks that her daily bus ride to work could have been the source of her exposure. Or, she said, she could have picked it up in the hospital where she works, at the grocery store, or from food served to her.

Longstanding inequalities also make African-Americans less likely to be insured, and more likely to have existing health conditions and face racial bias that prevents them from getting proper treatment.

Initial indications are that doctors are less likely to refer African-Americans for testing when they visit a clinic with symptoms of Covid-19, the disease caused by the virus. Since the disease can progress quickly, researchers say, a disparity in testing can lead to considerably worse outcomes. A lack of early communication about the threat of Covid-19 and confusing messages that followed left an information vacuum in some black communities that allowed false rumors to fester that black people were immune to the disease. Some places ended up behind in taking measures to slow the spread.

Sharrelle Barber, an assistant research professor of epidemiology and biostatistics at Drexel University, said the effects of government redlining policies that began in the 1930s linger. Many black residents live in segregated neighborhoods that lack job opportunities, stable housing, grocery stores with healthy food and more.

“These communities, structurally, they’re breeding grounds for the transmission of the disease,” Dr. Barber said. “It’s not biological. It’s really these existing structural inequalities that are going to shape the racial inequalities in this pandemic.”

Work kept Mr. Tolbert, 54, who drove a Detroit bus for 24 years before becoming president of the Amalgamated Transit Union Local 26, from staying home as the virus spread.

All through March, Mr. Tolbert said, he proceeded with his responsibilities of checking on the well-being of drivers at the bus depot and on passengers along city routes.

On April 2, Mr. Tolbert was coughing so much during a meeting with Mike Duggan, the mayor of Detroit, that Mr. Duggan suggested he get tested. He was one of the first people in the city to take a rapid test and got his results back in 15 minutes.

“I was social distancing — at least I thought I was,” Mr. Tolbert said. “I don’t know where it happened.”

The death toll has been particularly devastating among African-Americans.

“What’s really important is who is succumbing to the infection,” said Dr. Phillip D. Levy, the associate chairman for research in the department of emergency medicine at Wayne State University. “That gives you an idea of the severity of the illness and the impact on the community.”

One factor that might make the coronavirus more devastating for African-Americans is that they experience high levels of stress-mediated wear and tear known as “weathering,” said Arline Geronimus, a professor of public health at the University of Michigan who studies the concept.

Stresses like exposure to toxins, lack of sleep and racial discrimination, Dr. Geronimus said, can cause a kind of accelerated aging. The coronavirus is most lethal in people over 65.

Officials who are reporting racial data are doing so only for cases in which the patient’s race is known. For a large percentage of total cases in some places — sometimes more than 40 percent — no racial information is available.

And officials in many states, including those hit hard by the pandemic — California, New Jersey, New York and Washington State — have not provided statewide information about the race of patients.

That has raised anger in some corners. Senators Elizabeth Warren of Massachusetts, Kamala Harris of California and Cory Booker of New Jersey have demanded that the Trump administration collect race and ethnicity data on coronavirus testing and treatment. And Jumaane D. Williams, the public advocate for New York City, sent a letter to Mayor Bill de Blasio calling for the release of a breakdown of cases by race.

In Mecklenburg County, N.C., where black residents are overrepresented in the number of positive tests, George Dunlap, the chairman of the county commission, said he was skeptical of the data. He said he believed that African-Americans in that county, which includes Charlotte, were overrepresented because the group was being tested at a higher rate, according to information he said he received from county health officials.

“This current crisis lays out what we have known for a long time, which is that your ZIP code is often a determinant of your health outcome,” said Dr. Mandy Cohen, secretary of the North Carolina Department of Health and Human Services.

Judge Hoover, the Mecklenburg County Superior Court judge who has tested positive for the virus, is 70. His wife, Josephine, has also tested positive. He was receiving chemotherapy for multiple myeloma and she has diabetes, underlying medical issues that put them at higher risk of severe illness.

While Judge Hoover recuperated in their condominium in downtown Charlotte, Ms. Hoover, a retired math teacher, was hospitalized for two weeks. Even now, they are staying at least six feet apart in their home.

“I am assuming that I picked it up in the courthouse and gave it to her,” he said. “We were so scared. And we are still scared because we do not know for sure if we are out of the woods.”