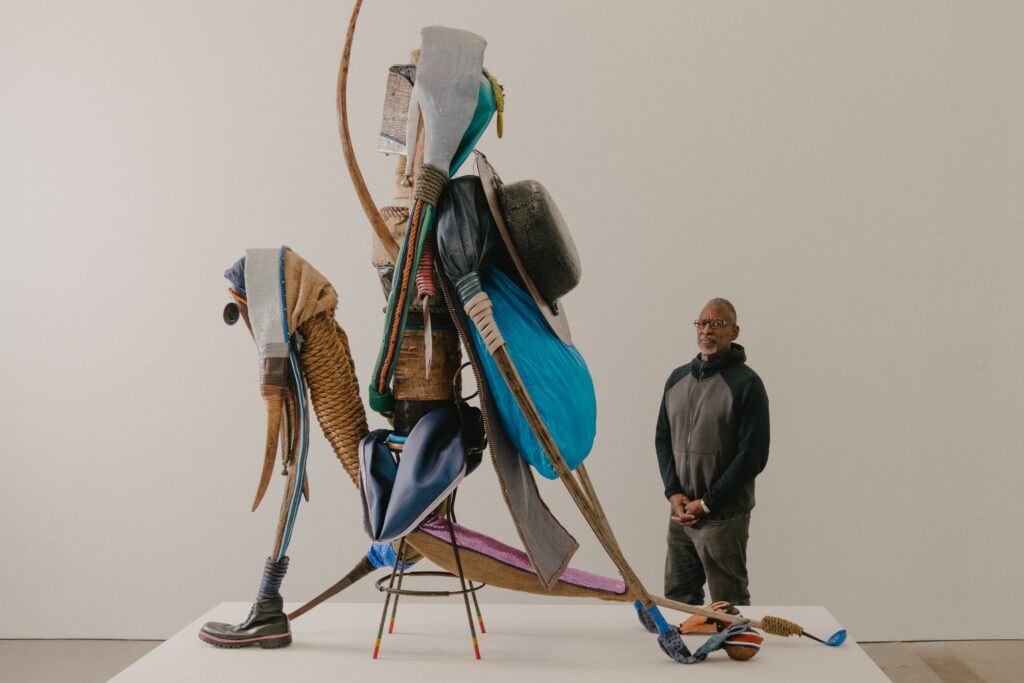 Posted at 16:57h in Cultura Afro-Puertorriqueña by admin
0 Likes

For the artist Daniel Lind-Ramos, a local hero in Puerto Rico whose altarlike assemblage sculptures of everyday objects have belatedly found acclaim on the mainland, the past month was to have been a celebration of his new visibility, which began with last year’s Whitney Biennial.

In early March, his first New York solo exhibition opened at Marlborough Gallery in Chelsea. Then he flew to Florida to receive the $50,000 Pérez Prize from the Pérez Art Museum Miami. He returned to New York to be close to his exhibition, visit with colleagues and friends, and be available for collectors and the news media.

Days later, the coronavirus crisis shut everything down. (The gallery, open by appointment, has posted the exhibition online at marlboroughgallery.com).

Until he made it back to Puerto Rico this week, Mr. Lind-Ramos, 66, whiled away the month the way many of us did: Alone in a rental in East Harlem, making tactical runs to the supermarket, watching movies, following the calamity by the sound of the sirens and the horrific dispatches online.

“We have to take everything that is within our reach to create images,” Mr. Lind-Ramos said. “I’m not in my studio, but I have paper, pens, pencils. So I can react to the situation.”

Disaster, in some ways, is familiar terrain.

Consider the history of marginalization faced by black Puerto Ricans — Afrodescendientes, as they are known — who make up communities like his own, Loíza, where he was born and works to this day. Consider Puerto Rico’s past decade of financial crisis and austerity, overseen by a Washington-imposed board, that has demolished incomes and unraveled the economy.

And consider Hurricane Maria, a natural disaster compounded by government failure, that devastated the island in September 2017, leaving an official death toll of nearly 3,000 and collapsing the infrastructure to the point that it took nearly a year to restore electricity completely.

“It was bad,” Mr. Lind-Ramos said. “Maria, forget it. It destroyed everything.”

But crisis also shakes up the visual language, the system of signs, as familiar objects or even colors take on enhanced meanings, while others spring from nowhere to take center stage.

The prevailing energy in Mr. Lind-Ramos’s assemblages is vibrant, even joyous. They incorporate coconuts and palm fronds and basketballs and gloved hands that stick out to strike drums and tambourines. There is a proletarian humor in his juxtapositions of an old television, heirloom skillets or a glass food-display case with jute fabric and tropical plant debris.

When the bright blue tarps from the Federal Emergency Management Agency covered punctured roofs across the island, Mr. Lind-Ramos worked them in as well. A FEMA tarp forms the vivid vestment of his “María, María,” an object-rendering of the Virgin Mary that also plays on the hurricane’s name, and that appeared in the biennial. (The Whitney later acquired the piece.)

“Where you find objects related to catastrophe, you can create images,” Mr. Lind-Ramos said. “Because there’s a history there, not only in terms of where the object comes from, but a history related to the consequence of the catastrophe.”

“So you can create images that are not that complicated to build — but that doesn’t mean that they won’t be strong and won’t reach a lot of people. There’s a big power there.”

For years, the power of Mr. Lind-Ramos’s work was closely held in community — in his hometown, and in the network of artists on the island, many of whom he taught over the years, first as a high school teacher, then as a professor at the University of Puerto Rico. “That commands an enormous amount of respect,” said Marina Reyes Franco, a curator at the Museo de Arte Contemporáneo de Puerto Rico. “And the stories that he chooses to tell are very rooted.”

Mr. Lind-Ramos has spent his whole life in Loíza, aside from the time spent earning his master’s degree at New York University in 1980 and a fellowship year spent in Paris in 1989. In the town, on the coast east of San Juan, the borders are porous between his home, his studio and the world of his family and friends, as Rujeko Hockley and Jane Panetta, the curators of the 2019 Whitney Biennial, found when they visited him in early 2018.

“We were in the orbit of his life,” Ms. Hockley said. “We saw the work, we went for a walk in the neighborhood, everyone said hi to him — this is his aunt, this is his cousin, that’s his friend he’s known since he was a kid. All these people were just around, and that was lovely.”

Loíza carries a specific history within Puerto Rico. It is a majority black town with an Afro-Caribbean culture that makes it kindred to Trinidad, Haiti or New Orleans; where the veneration of the orishas, divinities drawn from Yoruba religion, continues, and where the percussive musical genre bomba was possibly born and certainly flourished.

The British Navy was moored off Loíza when it attacked Spanish-held Puerto Rico in 1797. Black militias were instrumental in repelling the invaders, a role some scholars argue was silenced in historiography, diminishing the role of black Puerto Ricans in the island’s narrative. But in Loíza it is part of cultural memory, and many of Mr. Lind-Ramos’s assemblages allude to the battle.

Stalking his work, too, are Puerto Rican vejigantes, festival figures which in Loíza involve outfits and masks made with fronds and coconuts. Mr. Lind-Ramos grew up in a family of artisans; he makes his own masks for the annual Fiestas de Santiago Apóstol and weaves these icons into his art.

His materials come from cooking, building, gardening, celebrating. His old shoes sometimes become part of the work. One new piece centers on a huge grater, used for coconut or cassava, that an elderly neighbor gave him, an heirloom from her grandmother.

The mix of organic and industrial, ancient and anodyne, is by artistic design — “I like that contrast and the tension that it creates,” Mr. Lind-Ramos said. But it reflects a kind of practical authenticity: These are the objects at hand.

Franklin Sirmans, the director of the Pérez Art Museum Miami, described Mr. Lind-Ramos as “somebody who comes from a very specific place and manages to make magic that is universal out of that specificity.” He added: “That’s what happens when you have the ability to make sense out of the weird juxtapositions of life that you can see in materials.”

Mr. Lind-Ramos is known for his assemblages, but he trained as a painter and long made figurative work, including portraits of women that took on the differences between Western and African canons of beauty. But exposure to mixed-media art from Africa and the black Caribbean — including Maroon art from Suriname and French Guiana on the coast of South America and the work of Haitian artists such as Edouard Duval-Carrié — pushed him beyond the canvas.

For a time, he composed hybrid works, with paintings as part of installations. “I had to go to the object for the things I wanted to say,” he said. “Bit by bit I was taking the painting away.”

As he sketched in New York, watching the coronavirus crisis take hold, Mr. Lind-Ramos’s notebook filled with carnival characters and their accessories, augmented by medical and hygienic references. Microscopes, sanitizer bottles, but also musical instruments and palm fronds, invoked healing both medical and spiritual. The sketches are blueprints for new sculptures.

He drew Osayín, an orisha who has one leg, one eye, and one ear, and is associated with healing; and La Loca, or the crazy one, a masked character who appears in festival parades, cleaning the space with a brush. In his sketch, she sweeps up little virus particles, with their wheel shape.

As a system of knowledge forged in prior calamities absorbed new information, a visual language for this moment was coming into existence.

“In our communities we find healing in solidarity,” Mr. Lind-Ramos said. “After Maria we did not wait for the government to help us; we decided to help ourselves with what we had.”

The lessons of the pandemic would come in time, in community, he said. “We are still in this world because we still have each other.”